SAW PALMETTO: the natural source of strength for hair

The extracts of berries from the dwarf palm, Serenoa repens, commonly known as saw palmetto or sabal, have therapeutic properties and come from a tree that grows in North America. They have traditionally been used to treat urinary tract infections. Their use dates back to the Maya people, who used them as a tonic, and the Seminola tribe, who used their antiseptic qualities. But it is true that the saw palmetto can also prevent alopecia? 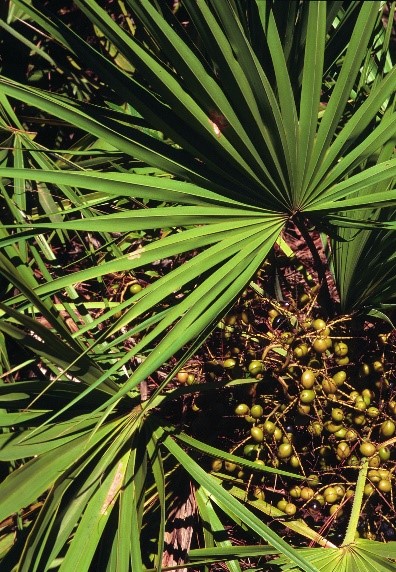 Of the various types of baldness, one of the most common is male-pattern hair loss, which is loss of hair at the temples and at the front of the head. It is generally caused by the enzymatic conversion of testosterone into dihydrotestosterone (DHT), which makes the hair follicles shrink and disappear. The distribution of these follicles prone to DHT can vary depending on the person, but the majority are found at the temples and crown as the follicles at the sides and back of the head are usually immune to DHT.

The action of the American dwarf palm has natural effect inhibiting on the DHT hormone (which in addition causes significant inflammation of the prostate and urethra): it naturally prevents the conversion of testosterone into DHT, with no side effects, after blocking the formation of DHT and its arrival to the cell core.It also has a direct inhibiting effect on the androgen receptors, and antiinflammatory properties.

This action is because the berries of this plant are very rich in fatty acids and phytosterols, specifically, plant sterol known as β-sitosterol. Both men and women have an enzyme called 5‑α‑reductase, which converts a small amount of the testosterone available into DHT.

This powerful androgen is responsible for inhibiting the growth of new hair cells, making the follicles contract with every growth cycle until they are no longer functional and the hair stops growing.

One of the first studies on the plant for hair growth was carried out in 1998. The participants were given a saw palmetto lotion, an oral saw palmetto supplement, a combination of the two or a placebo. At the end of the 50-week study, these were the results: 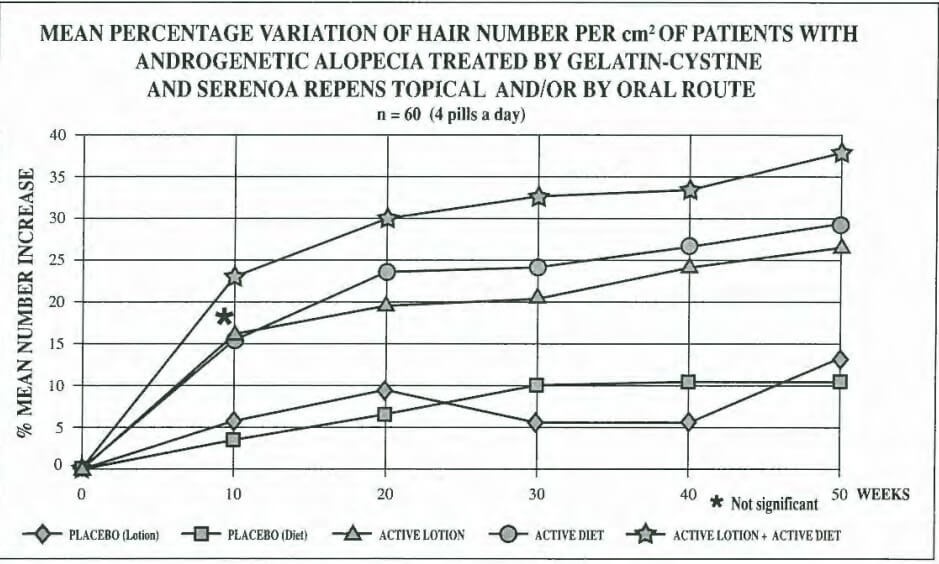 The graph shows the clear efficacy of the American dwarf palm in the inhibition of 5‑α‑reductase. As expected, treatment with the combination of the saw palmetto lotion and oral supplement was shown to be the most effective for improving the total hair count, and the hair mass. Similarly, the oral supplement was more effective than the lotion when used alone, but both the oral supplement and the lotion were more effective than the placebo treatment. According to the researchers, these findings further support the idea that saw palmetto is an effective 5‑α‑reductase inhibitor.

Link to the study

Another study by Prager et al. in 2002, that was published in the Journal of Alternative and Complementary Medicine established the efficacy of the 5-a-reductase inhibitors of natural origin (such as saw palmetto) against male-pattern baldness for the first time, justifying the need to extend to larger trials.

Link to the study

Currently, there are few products clinically tested to verify their true effectiveness, ability to stabilise hair loss and promote regrowth. REDENHAIR bases its integral treatment programmes for hair loss on clinical studies performed on both the active substances and the finished products, demonstrating the validity of the treatment for achieving a significant reduction in hair loss.

The food supplement HAIR NUTRITION SUPPLEMENT by REDENHAIR is a daily supplement that stimulates hair growth and keeps hair follicles healthy. It contains saw palmetto, which reduces the absorption of DHT by the follicles and decreases bonding to the androgen receptors, promoting healthy hair and growth. Similarly, it contains many other nutrients selected by specialists that improve the health of your hair. In addition, REDENHAIR ANTICANAS also contains this powerful natural ingredient to complement the treatment to restore the natural colour of the hair.

At REDENHAIR we have selected premium quality extract of serenoa repens for our products, which is a scientific guarantee for the health, preservation and growth of our hair.