Why use anti-dandruff shampoo? Is it possible to use it every day?
The most effective way to combat dandruff is the shampoo. It is important to know the form and frequency of use of [...]

Remedies to treat gray hair
Read below to learn more about the hair graying process and to discover how to get rid of gray hair naturally.

Haircuts to succeed this spring 2020
A whole new season begins and that means it's time for a new look. If natural hair and uncomplicated hairstyles [...]

Tips to care, tone and stimulate hair from home
From Redenhair, we reveal the key tips to practice from home, detailed by beauty experts, in order to make the [...]

Getting to know the hair loss process: the role of the 5-reductase enzyme
Have you ever wondered frequently the processes behind hair loss?

Try the new HAIR REGENERATING BRUSH!
At REDENHAIR we think of all the supplements that can help promote complete hair regeneration. That is the reason [...]

How to prevent gray hair?
Gray hair is a clear symptom of aging and, for that reason, a large part of the population tries to hide them [...]

To correct this problem, an active cosmetic ingredient has been developed which acts directly in the stimulation of melanogenesis and in the halting of melanin loss. This ingredient is GREYVERSE™, developed in mid-2018 and already winner of the BEAUTY INDUSTRY AWARDS as the best ingredient for hair care.

Greyverse™ is the result of a wide selection of several peptides tested in different biological targets which are involved in the process of hair greying. It is a palmyryl tetrapeptide (4 amino acids united in palmitic acid), whose active sequence is derived from the structure of α-MSH, known to be the main molecule which is capable of stimulating melanin formation, called melanogenesis.

As an α-MSH analogue, Greyverse™ is capable of binding to MC1-R, a transmembrane receptor located on the surface of the melanocytes. With the activation of MC1-R, this receptor stimulates the melanogenesis process, as well as the expression and activity of the catalase, which reduces the accumulation of hydrogen peroxide (H2O2) as an accelerating element of the grey hair formation process.

Due to its complete mechanism of action, Greyverse™ can act simultaneously and efficiently on the two main factors which cause the hair greying process:

-          It stimulates melanogenesis to increase the production of melanin in the follicles and to favour a better transfer which leads to the repigmentation of hair.

-          It reduces oxidative stress by increasing the expression and activity of the catalase, thus decreasing the accumulation of hydrogen peroxide, which maintains the complete colour of the pigment.

Unlike skin melanocytes, which if stimulated are able to produce a greater amount of melanin than the constitutive colour of the skin (facultative pigmentation), the melanocytes of the hair cannot produce more than they are genetically programmed to (only constitutive pigmentation). Therefore, Greyverse™ can only help the hair recover its natural colour and cannot obscure it.

The pigmentation of the hair is due to the presence of a pigment, melanin, secreted by the melanocytes located in the hair bulb and then transferred to the surrounding keratinocytes. The appearance of grey hair is a phenomenon directly related to the lack of melanin in the hair bulb.

In this study, the activity of Greyverse™ was investigated by measuring its effects on melanin production in a culture of human melanocytes. It was found that with only 0.5% of Greyverse™ in the formulation, and after 72 hours of treatment, the synthesis of melanin was significantly increased by 19%, improving the repigmentation of the grey hair. 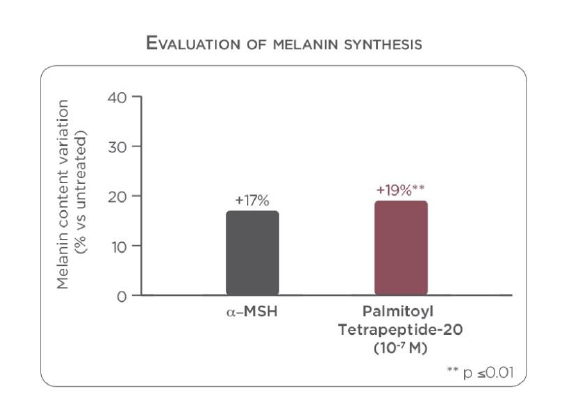 Melanosomes are generally divided into four stages of maturation determined by their structure and the quantity, quality and disposition of the melanin produced. The aim of this study was to determine the effects of Greyverse™ on the pigmentation of isolated human grey hair follicles.

To this end, the biogenesis of the melanosome of the hair was tested by testing different concentrations of this active ingredient in a scalp plasty of a 71-year-old Caucasian woman who originally had dark hair. After 7 days, melanosome protein expression increased, especially in the upper sheath and in the area of the bulb, a place of melanocyte stem cells, demonstrating an improvement in the melanosome maturation, necessary for an optimal transfer.

It was concluded that Greyverse™ promotes hair pigmentation by increasing the transfer of melanosomes and the synthesis of melanin, preferably of the eumelanin type. 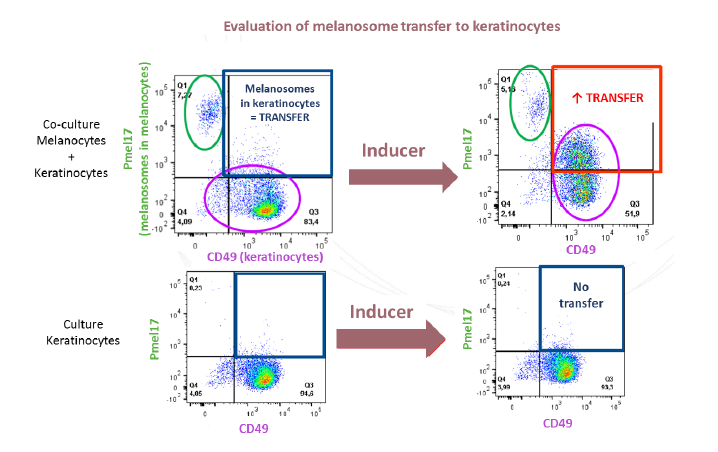 The concentration of 0.005% of Greyverse™ was tested and, after 72 hours of treatment, the transfer of melanosomes between the melanocyte and keratinocyte cells was significantly increased to 50%. This shows that this active ingredient stimulates the transfer of melanosomes, which increases the melanin content in the hair shaft and leads to the natural recovery of hair pigmentation. 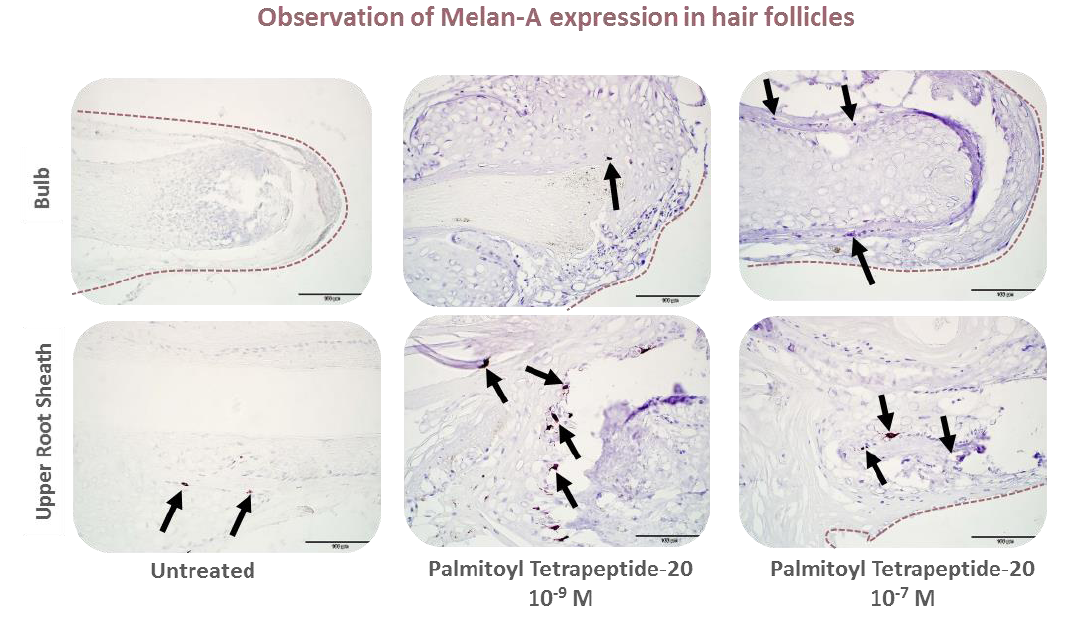 EFFECT OF GREYVERSE™ TUBE IN THE ENZYMATIC ACTIVITY OF CATALASE

Recent studies have shown that a deficiency of catalase, an enzyme which allows the transformation of hydrogen peroxide into oxygen and water (2H2O2 → 2 H2O + O2) in human hair follicles, contributes greatly to hair greying.

In addition, it has been proven to induce a change in the conformation of the structure of tyrosinase, synthesised by the melanocytes of the hair follicle, especially by the oxidation of the methionine residues of this key enzyme in the production of melanin. This structural modification of tyrosinase leads to a loss of its enzymatic activity and stops the synthesis of melanin in the melanocytes of the hair follicle.

The objective of this study was to determine the direct effect of Greyverse™ on the activity of catalase, measuring the amount of H2O2 which was not degraded by the enzyme.

The clinical evidence of the effect of this active ingredient is the most important argument, especially for applications such as the reversion of hair colour.

Greyverse™ was tested in selected volunteers with premature greying (between 35 years of age and more than 20% grey hair) and demonstrated to decrease the overall whiteness of hair and darken grey hair after 3 months of treatment, with remarkable results which were very visible: a reduction of 30% in grey density was achieved.

As a biological process, the process of hair greying involves several genes. The evaluation of gene expression and the synthesis of related proteins is an innovative way to demonstrate the efficacy of the product.

Based on an analysis of hair pulled from several volunteers, Greyverse™ demonstrated its ability to modulate some of the main genes involved in pigmentation:

-          The increase in the expression of the MC1-R gene increases the number of receptors responsible for the induction of melanogenesis.

-          The decrease in the expression of a competitor gene of α-MSH (ASIP) to bind to MC1-R favours the activation of this reception by α-MSH to induce better melanogenesis.

-          The increase in the expression of the MITF gene, which stimulates the synthesis of melanin. 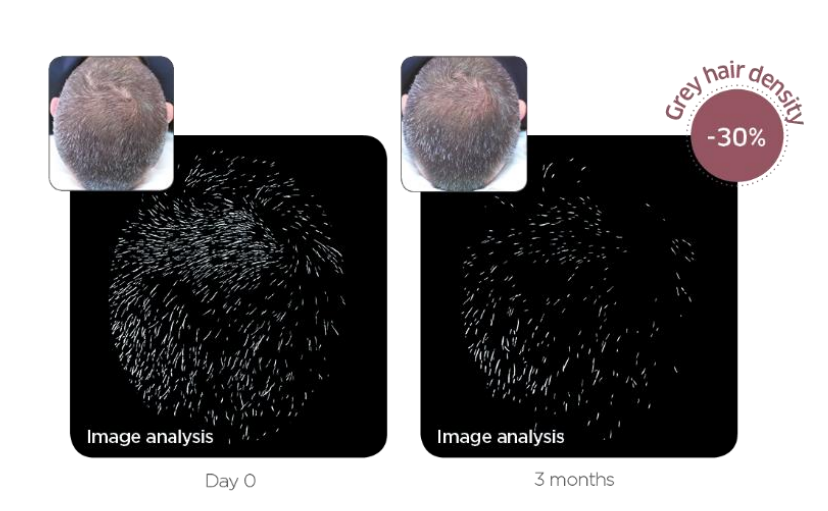 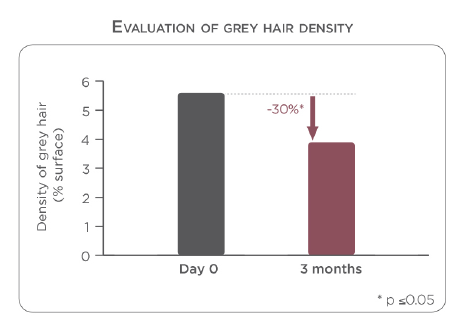 After reading about this ingredient and the revealing efficacy and clinical studies of the tetrapeptide of palmitate, you will most certainly want to know where to find it. Because it is an exclusive ingredient to treat the appearance of grey hair, you can locate it in our intensive treatment products ANTI-GREY LOTION ,  ANTI-GREY SHAMPOO AND HAIR NUTRITION SUPPLEMENT by REDENHAIR. In addition to this powerful ingredient, they also contain HYAL® TRIC NUCLEUS, REDENSYL®, BIOFUNCTIONAL CHROMAFEND™, MELITANE™, panthenol and niacinamide, whose combination provides the most beneficial effect for hair health, the disappearance of grey hair and the stopping of hair loss.

The continuous innovation and our great team of experts achieve maximum efficiency of our ingredients; for this reason we are pioneers in the development of products to treat hair loss.

And remember... Every month we carry out raffles and exclusive offers in our Social Networks! So follow us on Instagram or Facebook and enjoy our promotions.