DESIGN OF THE STUDY

The goal of the study was to assess the efficacy of the treatment for hair care with two Redenhair products that, combined, significantly reduce hair loss while stimulating growth.: HAIR NUTRITION SUPPLEMENTy HAIR REGENERATOR SERUM FORTE. 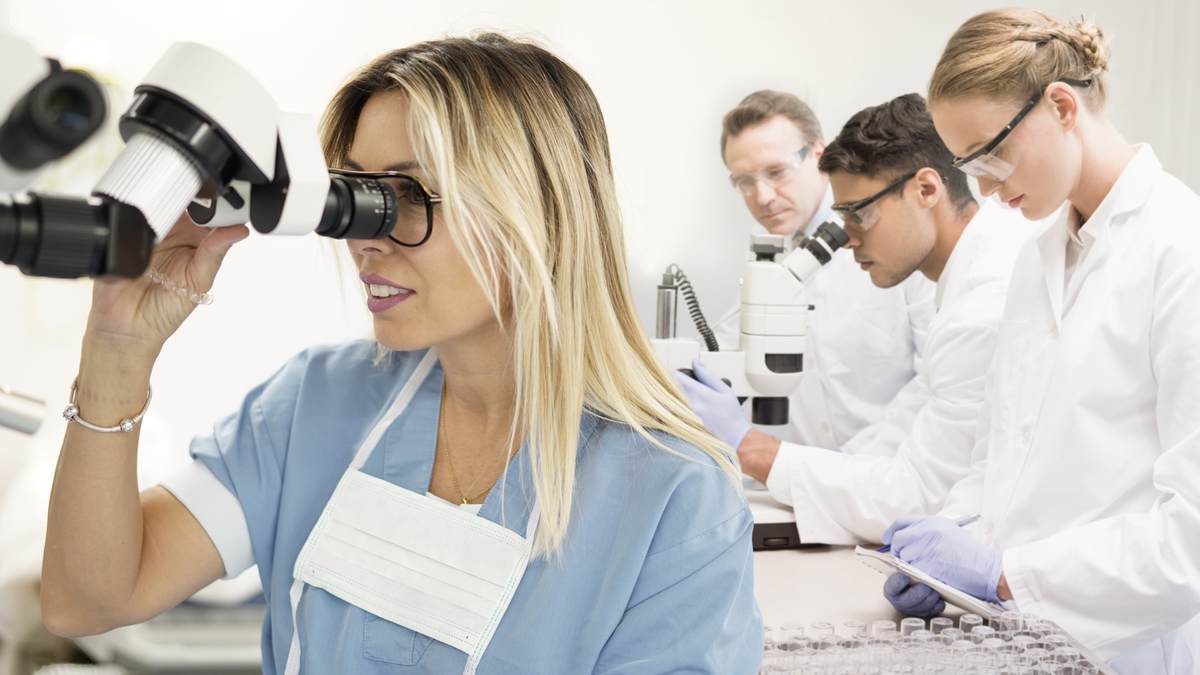 To achieve this goal, a clinical-instrumental study was developed on 30 healthy male subjects suffering from type I to III alopecia, according to the Hamilton-Norwood scale. The product's efficacy was evaluated by means of a phototrichogram, clinical evaluation and a self-assessment developed by the subjects who participated in the study.

The tested products were applied as follows:

- HAIR REGENERATOR SERUM FORTE:application of two pipettes each day on the scalp, massaging gently. After application, subjects were instructed not to wash their hair.

- HAIR NUTRITION SUPPLEMENT: subjects were instructed to take two capsules daily with a glass of water, at mealtimes, not exceeding the recommended dosage.

Subjects who participated in the study

The subjects participating in the study had androgenic alopecia from types I to III, according to the Hamilton-Norwood scale, remained under the supervision of a dermatologist certified by the board, formed by a panel of healthy male volunteers, in compliance with several inclusion and non-inclusion criteria. 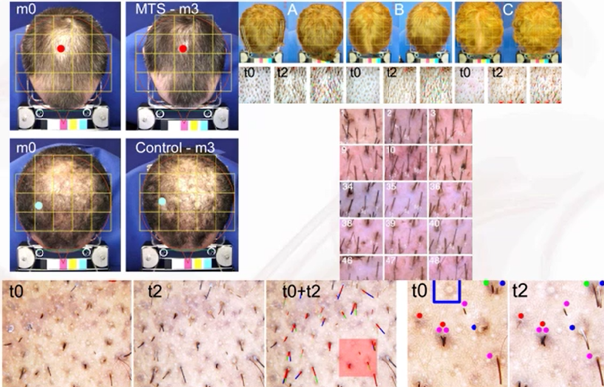 The images were taken on day 0, immediately after cutting the hair, and 2 days after trimming. These two photographs were examined by means of a software system that could recognise the individual fibres of the hair in the photographs. When comparing two images, the software could determine what hairs were growing (anagen phase) and which ones were not (telogen phase). They also evaluated hair density, and the total number of hairs per cm2.

The dermatologist evaluated the total hair volume and the general appearance of the hair, following the clinical punctuation scales listed on the following table:

The changes in the general hair volume during the clinical study were evaluated by the dermatologists using digital imaging.

Digital pictures were taken, under standard lighting conditions, using a NIKON D300 professional digital camera with a macro lens, an independent flash system, and crossed and parallel polarised filters. Four images were taken of each of the subjects participating in the study.

The subjects were asked to express their opinions on the tested product by means of a self-assessment questionnaire.

The results were reported in tables using the relevant units, the mean values, errors, and percentages of the subjects were calculated through different formulas. 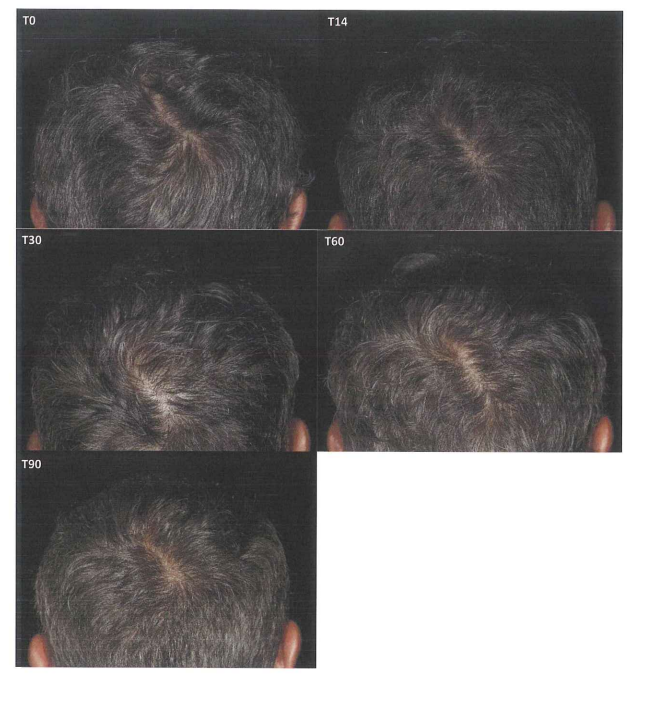 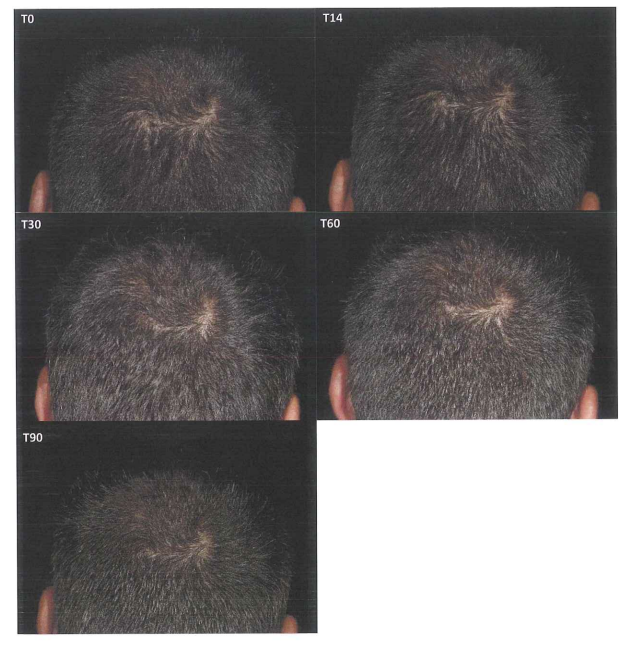 2. Results of the clinical evaluation - volume and general appearance of the hair 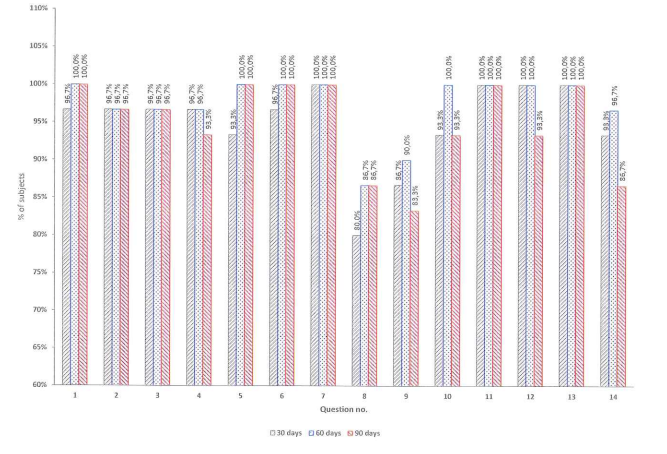 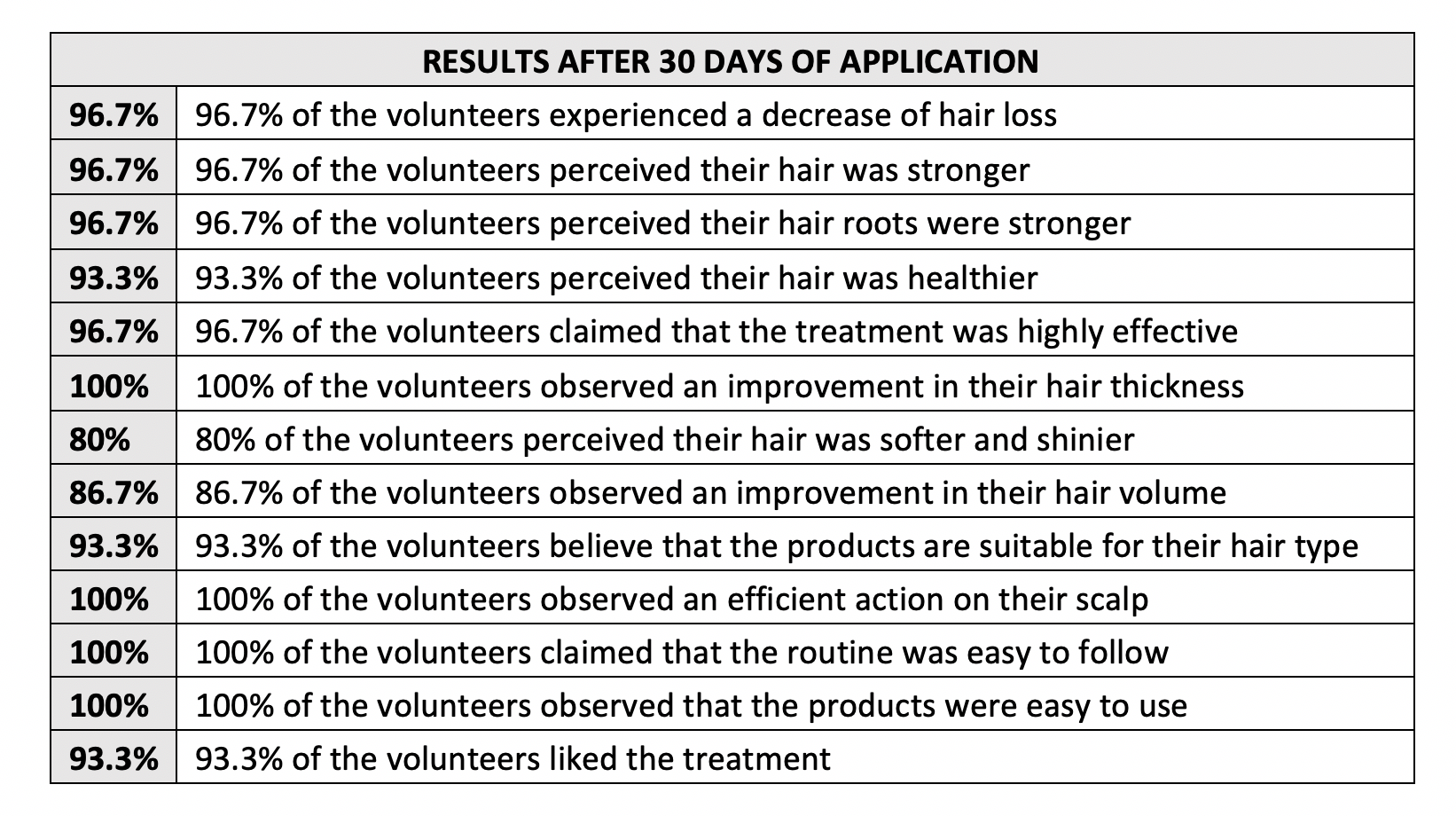 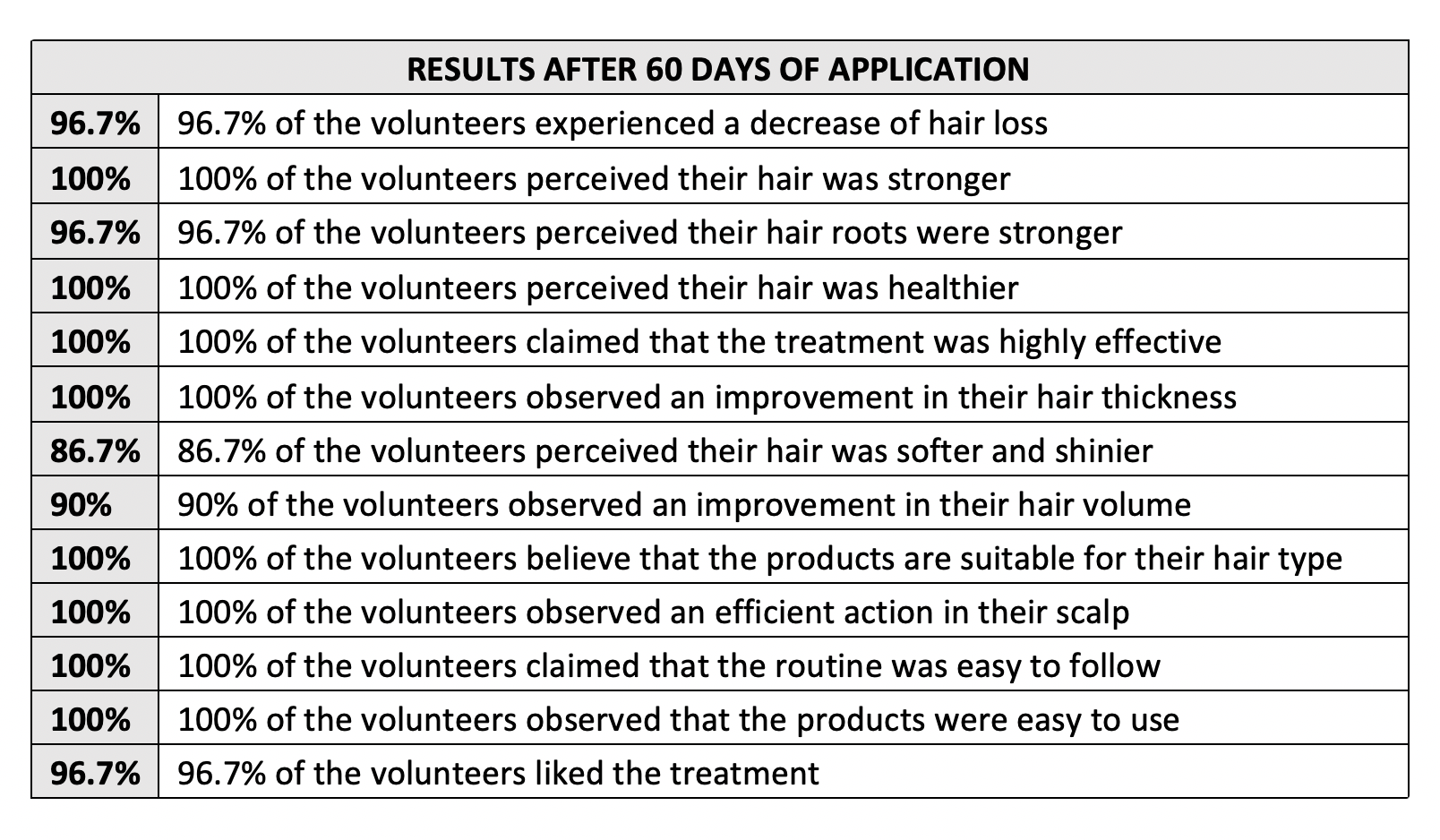 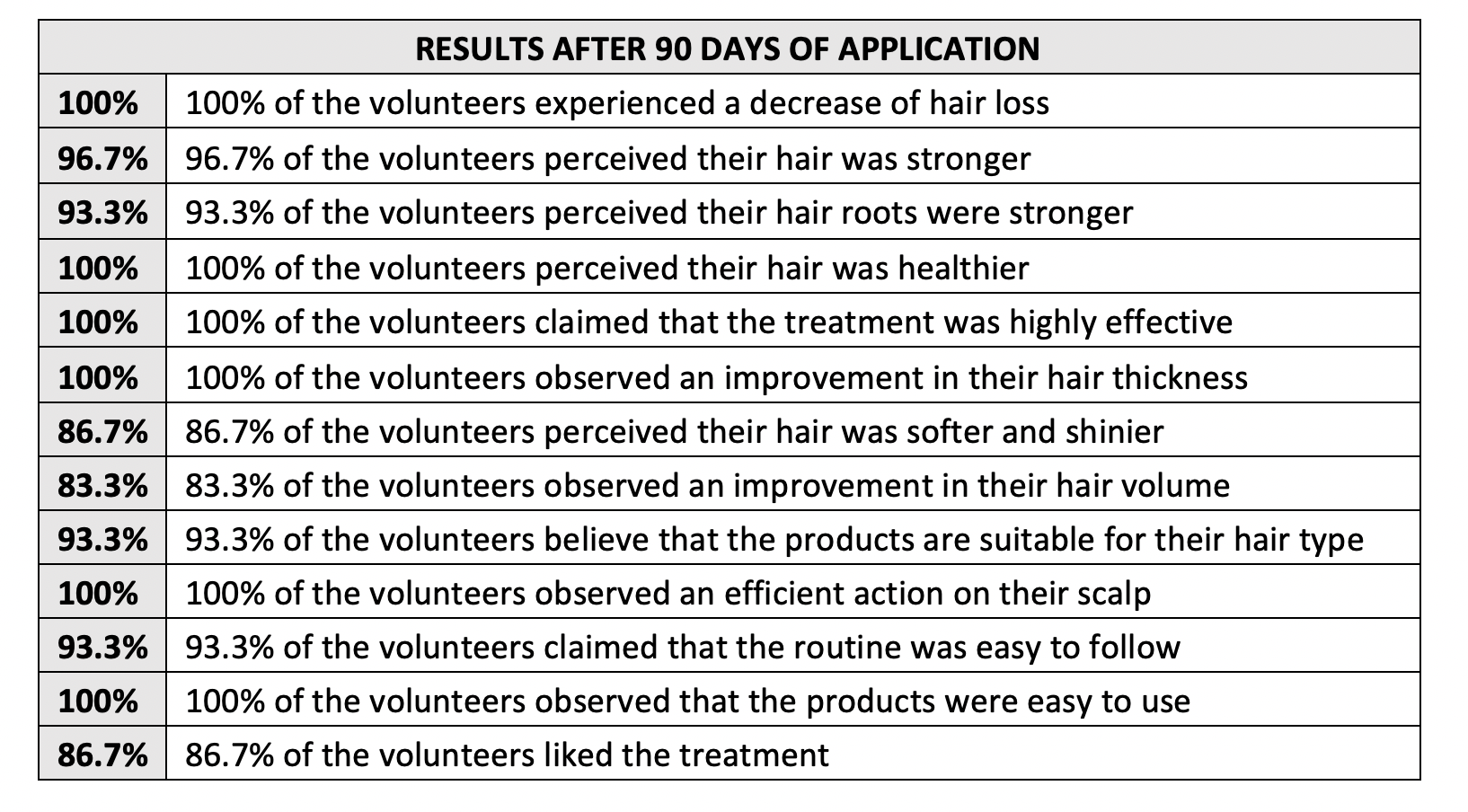 According to these results, it is possible to conclude that REDENHAIR HAIR REGENERATOR SÉRUM FORTE, the anti-hair-loss hair toner, and REDENHAIR HAIR NUTRITION SUPPLEMENT, the food supplements that stimulate hair growth, showed:

The treatment was positively assessed by most individuals participating in the study. For each item on the questionnaire, the percentage of subjects responding positively amounted to at least 80%.

Both products used in this study were well-tolerated by the participants.